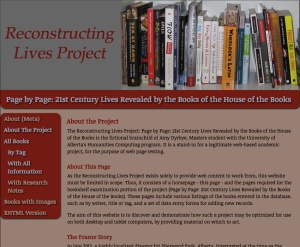 PLEASE NOTE: This site is down at present due to a July 2014 server move. I am currently troubleshooting the issue with the Univerisity of Alberta’s Arts Resource Centre and aim to have it back up and running by July 31.

For my Masters thesis, I took a somewhat unusual, though not unprecedented, tack and integrated a hands-on development component as a supplement to a more traditional research-based argument.

Within my final thesis, HTML5, Tablet Computers and the Emerging Web Paradigm, this took the form of a case study component in which I explored the design and development of a website in dual XHTML/CSS and HTML5/CSS3 versions.

The first version used XHTML Transitional with CSS2, chosen to represent the most common markup and styling used in Digital Humanities projects with a web component. For the second, I converted the XHTML and CSS to basic HTML5 and CSS3, chosen as representative of recent changes within web development. This second version also included examples of stylesheets targeted at mobile devices, in this case an iPad2.

The thesis itself provided a history of markup and its longstanding role in the Humanities, discussed in terms of Thomas Kuhn’s concept of the paradigm shift as described in his 1962 book The Structure of Scientific Revolutions. I traced role of computers and text markup in Humanities research from Digital Humanities pioneer Father Roberto Busa’s concordance of the works of St. Thomas Aquinas, begun in the 1950s, to the introduction of SGML as an ISO standard, and finally to modern web markup. Within this context, and with reference to Kuhn’s model of how change takes place in research-based environments, I argued for Humanities researchers to adapt to and adopt recent technologies such as tablet computers and developments in web markup such as HTML5. The case study website supported my argument by providing direct examples of how this could be implemented.